Bryant University cultivates the qualities of character and leadership throughout the organization. The president, administrators, faculty, students, and alumni all share a deep commitment to the University's mission.

The Honorable Ronald K. Machtley became Bryant's president in 1996. Under his leadership Bryant has experienced unprecedented growth throughout the organization. Machtley's pivotal contributions in areas including academic excellence, enrollment, campus expansion and technology have established an exceptional foundation for continued success. 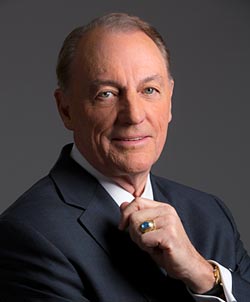 Prior to assuming his duties at Bryant, President Machtley served as a United States Congressman for the State of Rhode Island from 1989 to 1995. He was a member of the House Armed Services Committee; was the ranking Republican on the Small Business Committee's Minority Enterprise, Finance, and Urban Development Subcommittee; co-founded the first U.S. House Working Group on Mental Health; and served as co-chairman of the New England Energy Caucus. Indicative of the esteem of his congressional colleagues, he was elected President of his Congressional Class during each term that he served. Prior to serving in Congress, President Machtley was a practicing attorney. He co-edited a book titled The Telecommunication Act Handbook.

President Machtley has served on the boards of several corporations, and many civic and charitable organizations including The Rhode Island Foundation and as the President of the Rhode Island Public Expenditure Council. In 2011, he was recognized by the New England Board of Higher Education (NEBHE) for his exceptional leadership on behalf of higher education and the advancement of educational opportunity. Machtley has been recognized by numerous organizations for his leadership. He has been listed in Who's Who in American Politics, Who's Who in the East, Who's Who in America, and Who's Who in the World.